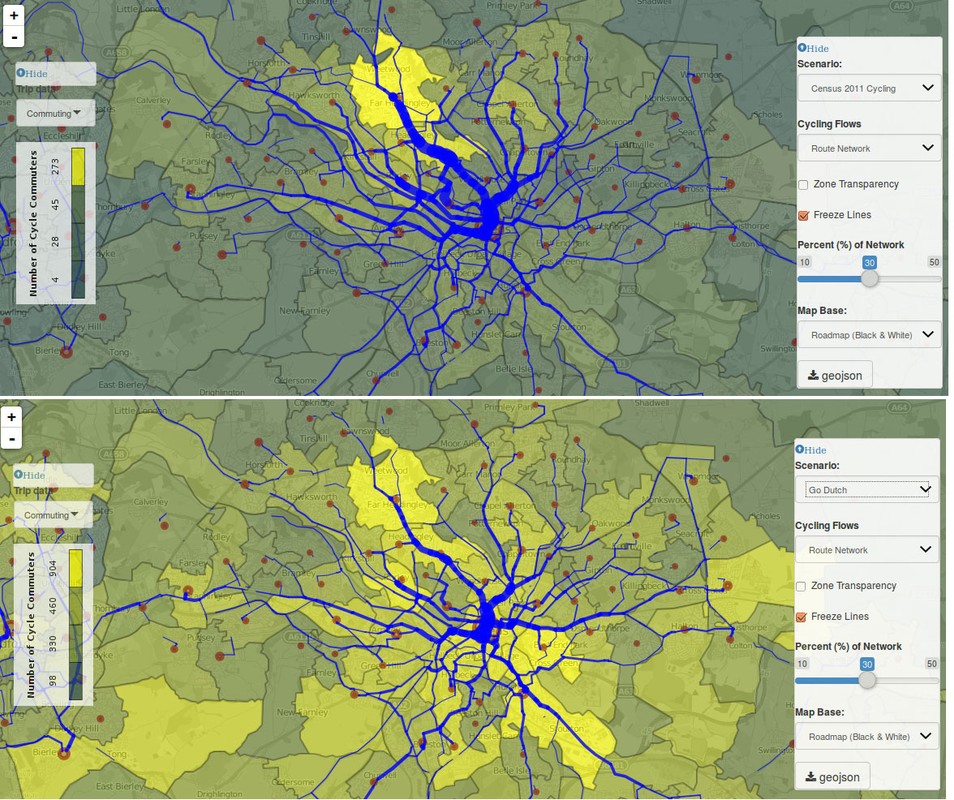 The Propensity to Cycle Tool

The Propensity to Cycle Tool (PCT - see www.pct.bike ) is a new, publicly accessible, open source and online system for sustainable transport planning. The key question that the PCT answers is "where should new cycle paths be prioritised". It was funded by the UK's Department for Transport (DfT) and was developed by a group of academics, ensuring that it will be made available for others to use, free of charge, thanks to the AGPL license. The PCT provides an evidence based approach to support planners deciding where to prioritise investment in cycling. Specifically, it helps planners to to prioritise cycling infrastructure notonly where it is easy to build, or where there are an existing large number of cyclists, but to prioritise areas where it is most needed. New cycle paths should be built for tomorrow, not yesterday, so a key feature of the PCT is its provision of scenarios which represent different cycling futures. These are described below for PCT-England, but we plan to create alternative scenarios when the PCT is deployed to new cities and countries around the world. The PCT visualises data at 4 main levels on an interactive web map with different base-maps. main aim of the PCT is to visualise and explore future demand for cycling. However, it is also a useful tool for exploring the geographical distribution of current cycling patterns. The visualisation levels described below work for every scenario. 1) At the area level, the PCT shows the percentage of people in each zone who reported cycling as their main mode of travel to work. 2) 'Desire lines' are straight lines connecting where people live to where they want to travel. The PCT visualises these as straight lines, showing where people would want to travel if they were not constrained by the road network. This is useful for imagining where new cycle paths could be created, regardless of roads. 3) The route level is the same as the desire line level, but the straight lines are converted to routes. This was was done thanks to CycleStreets.net, a not-for-profit journey planner 'by cyclists, for cyclists'. For each origin-destination pair the PCT can show both the fastest and the quietest routes, as defined by CycleStreets. This distinction can be useful for planning new routes. 4) The route network layer goes a stage further. It is the result of aggregating all overlapping route-allocated desire lines. The route network layer is crucial for envisioning cycling scenarios because it provides an estimate of how many cycle commuters could use specific road segments and therefore plan for the appropriate width and capacity of new infrastructure. The scenarios included in the PCT for England were: Scenarios include a) Government Target: this represents a doubling in cycling. b) Gender Equality: this shows what would happen if women in England as much as men in each area. c) Go Dutch: this represents what would happen if Dutch propensities to cycle, accounting for hilliness and distance, were achieved. d) Ebikes: this scenario extends the Go Dutch scenario using data from the Netherlands and Switzerland on how e-bikes help overcome the barriers of distance and hilliness. As open source software using OpenStreetMap data, the PCT has the potential to scale worldwide. We look forward to deploying the PCT in new contexts and showcasing how it can be used by city planners looking to create more sustainable and healthy transport systems.