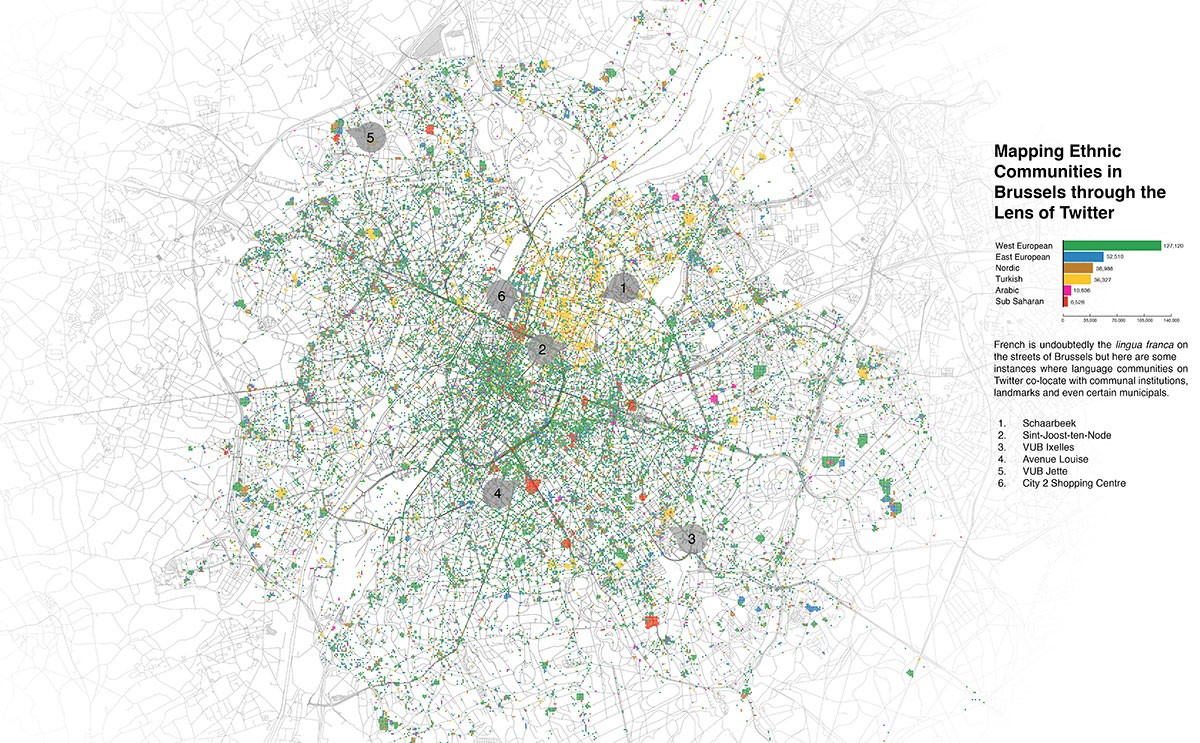 Mapping Ethnic Communities in Brussels through the Lens of Twitter

Brussels, the capital of Belgium is not just home to the European Parliament, but also one of the world?s most multicultural cities. Census data is commonly utilised to create maps that show the distribution of ethnic communities. Yet as large volumes of geotagged data from Twitter become increasingly available, new opportunities arise to study the spatial behaviour of people. Visualising geotagged tweets from 2013, we show the geographic distribution of language use in the city. A novel gridded dot mapping technique was utilised to expose several engaging patterns in the data. French is undoubtedly the lingua franca on the street though Brussels serves as the capital to both the French and Flemish communities. Notably, other languages are observed to co-locate with communal institutions, landmarks and even certain municipals. These occurrences are highlighted on the maps. Noteworthy examples include the concentration of Flemish tweets at VUB campuses, the VRT as well as the Flemish and Federal parliaments. English, on the other hand, is most prominent in the vicinity of the European Parliament. Accordingly, the concentration of Turkish tweets within Sint-Joost-ten-Node and Schaarbeek is unsurprising as these municipals are known to house a large migrant Turkish population. In comparison to similar maps depicting populations over large, contiguous blocks of territory, our outcome reveals more intricate spatial patterns that portray the complexity of language communities in Brussels. However, such maps tend to portray a fairly selective representation of the population. Because geotagged Tweets are generated by smartphones, the data only represents a privileged demographic with access to mobile Internet. Furthermore, only a small percentage of tweets are likely to be geotagged. Nonetheless, our results broadly align with existing knowledge of communities in the city and demonstrate the potential of this data for analysis of other human behaviour.