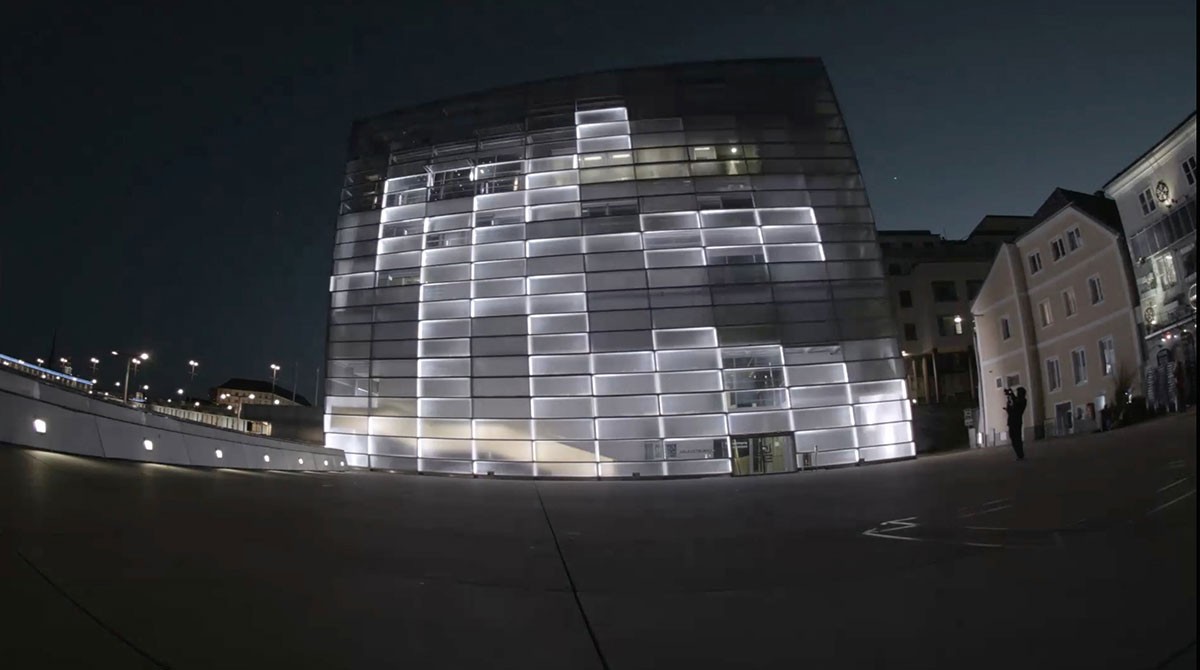 Urban Entropy by Dietmar Offenhuber, is an auditory display of complaining and repair, as on-going and necessary as the dynamics of the never-stable and continuously developing city. The installation ?reads? complaint letters to the local government of the city of Linz through speakers embedded in the fac?ade of the Ars Electronica Center. The complaints are submitted through an online complaint system Schau.auf.Linz (Look at Linz) provided by the city of Linz, using web and smartphone interfaces. The letters are read as they come in by an array of digital voices. The soundscape of these aural complaints are accompanied by simple visualizations of big violet words and numbers on the fac?ade. A random binary pattern on the fac?ade is continuously sorted into regular shapes, until the next incoming complaint frustrates the e ort and the story begins again. By means of these audio and visual translations, people who submit a complaint are made cognizant of the fact that it?s then immediately visible by anyone in the cityscape. The main interest of the artist behind this work was the role of citizen complaints in the civic and public space of the city. We often think of the Internet as a form of digital public space that can extend or augment physical public space, but there is certainly an important di erence - if the latter even exists. In physical space, we do not have control over who or what we might run into ? a friend, or a person we would rather not like to interact with. Writers such as Jane Jacobs and Richard Sennett saw this ?forced exposure to diversity? as a defining quality of public space, which does not exist in segregated suburbs or gated communities. From this perspective, the Internet is more like a gated community ? we will only find what we explicitly look for, keeping everything else outside our personal filter bubble. Since the complaint letters directly address civic issues, they should be part of public space. Through this intervention, the artist wanted to recreate this experience in a manner of ?forced exposure?. ?Entropy? is a concept that refers to the amount of disorder in a physical system. The title Urban Entropy was chosen to indicate that the city is always a work in progress, never complete, always a bit broken, and constantly being"fixed". At the time of realizing the work, the complaint system in Linz had been in place for several months, and people were starting to use it. When reviewing the com- plaints, one could see that there were many topics of crucial importance emerging through this medium. A key question was whether the tone and arguments of the complainers would change if they knew that their reports would be read from the Ars Electronica Center fac?ade (they were otherwise published on the website). The results could go either way ? some people might reconsider and tone down their letters in response, other might seize the opportunity of having a larger, captive audience. The project was created during a residency for the Connecting Cities conference and the Soundframe festival. Ars Electronica Futurelab supported its technical development. The residency in the Futurelab provided an opportunity to exchange with other artists and designers, who were also grappling with the possibilities and limitations of the fac?ade. rban Entropy was presented at the Connecting Cities conference in early April 2015, the Soundframe festival in Vienna taking place at the same time, and finally at the Ars Electronica Festival in September 2015. An important geographic context is the Ars Electronica Center, which is located immediately opposite the Linz City government building, and so the work benefitted from the appearance that the complaints presented within the artwork might be made directly to the local government. Popular topics concerned for example, issues related to garbage and cleanliness, and public transportation. The results were some- times hilarious. Austrians are very good at complaining, and the sarcasm and irony of the elaborate complaint letters translated perfectly into the emotionless computer voices, which caused more than a few people to crack up on the street. In contrast, on some issues such as complaints about the influx of refugees, the opinions of their writers are not always easy to listen to. The work was mostly built upon existing infrastructure. The artist built a java application that connected to the API/ Processing interface for the Ars Electronica Media Fac?ade and the internal interface to the Schau.Auf.Linz data from the city of Linz. The complaints are further analysed and categorized using machine learning techniques. No extra hardware or software was used and everthing worked in real time. Text from the publication ?Urban Entropy.? In What Urban Media Art Can Do: Why When Where and How?, edited by Susa Pop, Tanya Toft, Nerea Calvillo, and Mark Wright. S.l.: Av Edition Gmbh. (2016)