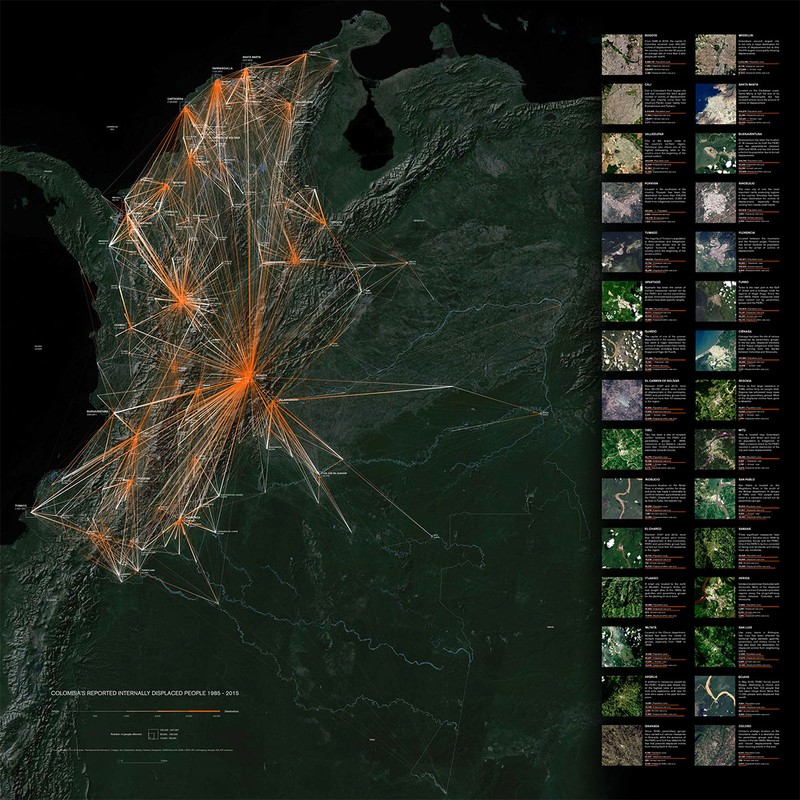 Over the course of the last thirty years, more than 7 million Colombians have left their homes and towns in a search for safety. Concentrated in the regions around Medellín, Buenaventura, Sincelejo, and Santa Marta, much of this displacement occurred in the areas where the conflict between the guerrillas of the FARC, the Colombian armed forces, and right-wing paramilitaries was the most intense. This mass migration, with its dense network of specific and often hyper-local causes, forms one part of the much larger global story of human beings on the move, mostly from countryside to city. But this movement of people also underlines the fact that the massive urbanization of the planet is born out of conflict. Who has not heard that by 2050, more than 66% of the world?s population will live in cities? Behind this seemingly inevitable transformation lies battles of all sorts: military, political, social, economic, ethno-religious, imperial, ecological.... In Colombia, the armed conflict, if not the movement, might be nearing its end. After more than three years of negotiations between the government and the FARC ? and following a controversial demobilization process by the paramilitaries in 2005 ?Colombian citizens might soon vote on a referendum to approve a historic peace accord between the two parties. In this project we plot the trajectories of these Colombians in conflict, thanks to one dataset: the Registro Unico de Víctimas, a massive project undertaken by the Unidad para la Atención y Reparación Integral a las Víctimas as part of an effort to allocate reparations in the ?peace-building process.? As of May 1, 2016, 8 million Colombians were registered in the database and more than 6.2 million of them were ?subjects of aid and reparation.? The data reflects their stories ? not simply the ones that will lead to aid, but the thick, complicated and often contradictory narratives of an extended and multi-sided conflict, an archive of the memories of millions of people. How has this war affected cities? And how has the conflict played out in the countryside? How have cities ? small, medium and large ? coped with these massive influxes of displaced people? Can spatial analysis ? indeed spatial memory ? figure into discourses of cultural and historical memory? And what relationships can we discover between land use and conflict or the built environment and war? Government agencies have led data collection efforts designed to inform policy; cultural and civic groups have led extensive efforts to document cultural and historical memory with the intention of furthering transitional justice. Our work is situated between these two realms: it introduces spatial memory into the discourse of transitional justice, and provides insights that might inform nuanced transitional justice policies that are responsive to local needs and cognizant of socio-spatial phenomena. Our map shows an overview of the routes of internally displaced people in Colombia from 1985 to 2015. Depending on thickness, each line represents between 50 and 40,000 displaced people. The color white marks origins, while orange rep- resents destinations. Zooming in and zooming out, we highlight specific events, places, and people that offer interpretations of the conflict, its traces, its memory, its impact, and its future.