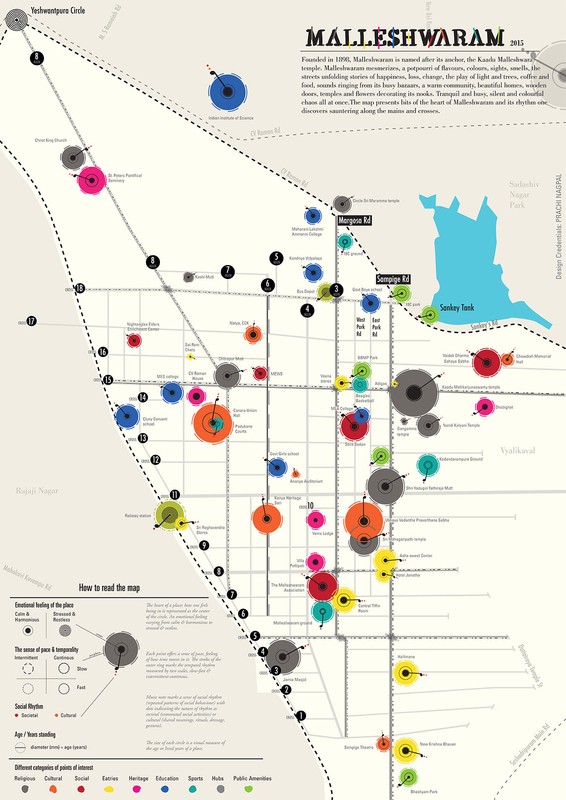 Malleshwaram mesmerizes, the heart of it?a potpourri of flavours, colours, sights, smells unfolding in the streets; the play of light amidst the green of trees, coffee, food and sounds ringing from its busy bazaars, a warm community with beautiful homes, temples and flowers decorating its nooks?is many complex layers. Tranquil and busy, silent and colourful chaos all at once. Sauntering along its mains and crosses, one soaks in this ?image of the city? as Lynch would call it. Malleshwaram Memoirs is an attempt at visually expressing the rhythmicity of Malleshwaram, an orchestration of selective rhythms constituting its urban fabric one experiences being in it. The Oxford dictionary defines the map as a diagrammatic representation of an area of land or sea showing physical features, cities, roads, a spatial representation. Maps historically have been instruments to represent the topographical terrains and mark the boundaries of a political canvas. Is map merely an instrument for way finding as we more commonly use it today? Can maps become a vehicle for reordering the way we see a place? Rebecca Solnit calls the map a ticket to the actual territory, map as an invitation. The work is an experiment to entice and invite the reader to walk about the streets of Malleshwaram, a hundred year old neighbourhood characteristic of the city of Bangalore. It employs the notion of rhythms (defined by Lefebvre and others) exploring techniques for creating narratives that braid different rhythms in urban spaces; to make visible that sense of ?lived place? we have soaked in but is invisible otherwise. The work metaphorically presents the city place as a musical ensemble, a symphony uniquely shaped by its sense of dwelling. The technique (a work in progress) is promising in offering a visual framework to develop new modes of notation for representing complex urban phenomenon that may in turn be instrumental in informing urban planning decisions to nurture places and not just spaces.